Series 2 HDD-SSD shredders have a dual-head cutting chamber that will shred solid-state drives on one side and rotary hard drives on the other. Each side has its own labeled infeed chute and shred width. The SSD side will shred SSD’s, cell phones, memory cards, circuit boards & thumb drives to 3/8″ wide particles. This small shred size is required to destroy the memory chips that SSD’s use to store data. Any batteries must be removed before shredding.

The Series 2 HDD-SSD shredders will shred hard disk drives in addition to backup tapes, DVDs, cell phones, and assorted small e-scrap to our recommended 1.5″ wide particles. The AMS-1000HD-SSD is also available in 3/4″ and 1″ shred widths for the HDD side. Enterprise hard drives take at least twice as long to shred as standard drives, on which we base our throughput. Series 2 HDD-SSD shredders are slow speed, high torque dual shaft shredders that are manufactured in the U.S. They can be stationary or placed in trucks for mobile hard drive shredding.

The Series 2 HDD-SSD shredders include an output conveyor that can be substituted for an infeed conveyor on the AMS-1000HD-SSD-STAND shredder, which has a drop-down discharge. The stand model is only available on the 10 HP model, which was designed to bridge the gap between Series 2 and Series 3 HDD-SSD hard drive shredders. It has a more robust drive train, bigger bearings, and larger diameter shafts and cutters. It is our response to the continued advancement of denser hard disk drives. 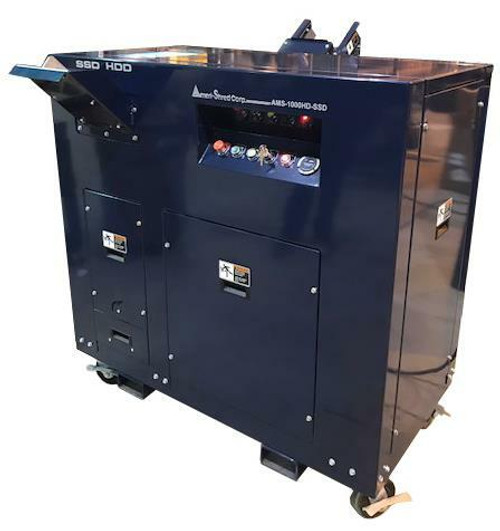