The IRONCLAD Erasure and Destruction Verification System automatically captures a JPG image of the hard drive immediately after it is degaussed and generates an exportable proof-of-destruction certificate for audit and archival purposes.

Overwriting is a method where a random pattern of usually "1" and "0" is written to every part of the drive, frequently three times, to obliterate the underlying data. The advantage of this method is the drive can be re-used. The disadvantages are: it takes a skilled operator to ensure the overwriting is done correctly; non-functioning sectors of the hard drive cannot be overwritten allowing data to remain on the drive; it takes a considerable amount of time-hours, and therefore electricity; and it is not regarded as failsafe, or permissible for the highest data security standards such as the NSA, CIA, or DoD.

Degaussing is the process of exposing the media to a strong magnetic field of sufficient strength to magnetically destroy the data. The advantages of degaussing are: a skilled operator is not required to operate a degausser; the magnetic field destroys the all data on the drive in approximately 1/10 of a second regardless of whether the drive is functioning or non-functioning; and degaussing is recognized by the NSA and DoD as an appropriate method of secure data destruction. The disadvantage of degaussing is the hard drive cannot be re-used.

After degaussing, the data on a degaussed hard drive simply no longer exists.

The HD-2XT will assist you in meeting compliance standards for government mandates requiring complete elimination of sensitive information stored on magnetic media prior to re-use or disposal including: 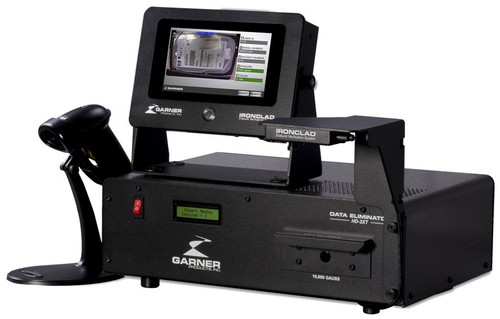