Call us for pricing

The MSI Plus T3 Portable Forensic NVMe + SATS/SATA unit is a forensic imager with the ability to perform in the field multiple Forensic tasks, allowing the Forensic investigator to capture data from multiple source drives, with supports to many kinds of storage interfaces, to multiple target drives simultaneously and extremely fast. It also enables the user to perform a full Forensic analysis in the field by using EnCase, Nuix, or any other analysis application for Windows 10, perform extraction and analysis of data from multiple cellphones, or use and run any third-party Windows 10 application. The unit is compact and easy to carry, with built-in 4 ports of SAS/SATA (with a secure connector), 1 port of e-SATA, 8 ports of USB3.0/3.1, 1 port of Thunderbolt 3.0 (40Gigabit/s), and it is supplied with a Thunderbolt 3.0 Expansion box with 1394A/B and NVMe M.2 controllers that plug inside the TB 3.0 box and provides supports to those interfaces. Additionally, the Thunderbolt port and the Thunderbolt 3.0 Expansion box allows the user to capture data from Mac, save captured images to a network via 10Gigabit/s Ethernet, or, with the use of other storage controllers such as SCSI, FC, add-on more SAS, and more, to capture data from almost any type of storage interface.

The MSI’s main application (the unit’s software) supports many imaging methods like Mirror Image, Encase E01/Ex01, and Linux-DD. Here are some of the tasks that the unit can be used for:

The unit is supplied with 2 NVMe U.2 to M.2 adapters, 2.5” NVMe cables, and a TB3.0 to PCIE Expansion Box with NVMe M.2 controller, 1394A/B, Remote capture KIT, and Virtual Emulators option is enabled.

The user can perform in a single run:

The unit Operates as a Platform: 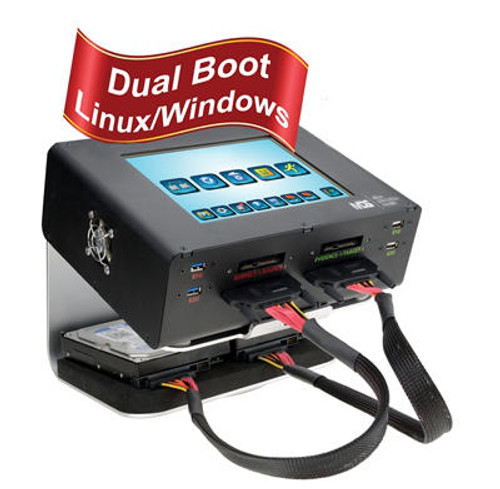