With a 20,000 Gauss field, the TS-1XT NSA-EPL listed degausser completely erases all data on hard drives and tapes in under 15 seconds. The TS-1XT also comes standard with a SCAN-1X scanner and software package to create an audit-worthy media destruction report as you degauss.

Combine the TS-1XT degausser with the IRONCLAD Erasure Verification with JPG Image Capture System for complete, permanent, and verifiable data elimination. The best audit trail and proof-of-erasure reports with JPG images of degaussed hard drives and a record of Gauss field strength for each cycle.

Degauss Before you Destroy

Note: Solid-state media cannot be degaussed. Physical destruction of the media with the Garner SSD-1 solid-state destroyer is recommended prior to the media leaving its secure environment.

Government Mandates:
As an NSA approved degausser, the TS-1XT has been tested to and exceeded the most stringent requirements for complete erasure of magnetic media at the highest security levels including Top Secret. This approval meets all compliance standards for government mandates requiring complete elimination of information stored on magnetic media prior to re-use or disposal including: 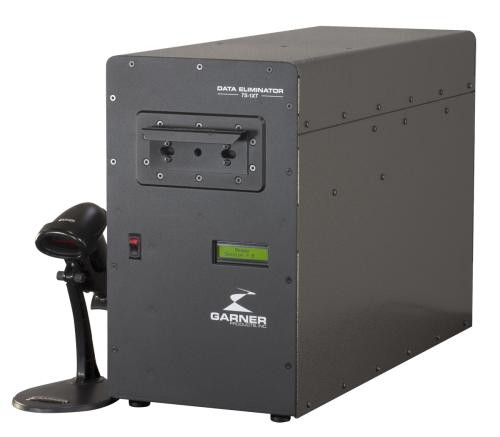