The Data Destruction Auditor records all operating and degaussing information which can be saved and printed, giving hard copy evidence of complete erasure for reporting and auditing purposes. Media erased is identified with an automatically printed self adhesive label with degaussed details, including media serial number.

The SDD Master generates the strongest erasure field of any degausser on the market. The SDD-Master delivers a minimum magnetic field of 17,750 three times to the media throughout the automatic operation. This ensures that the SDD Master remains unrivalled by any other degausser on the market. Where security is of the utmost importance, users can quickly sanitize their media without the need for disassembly.

The SDD Master is a table top mounted, chamber degausser, making operation safe, effective and simple for anyone.

Operators simply lift the Perspex lid, insert the media into the caddie, close the lid and press the “Start” button via the control panel. Media is transported into the degausser where the magnetic field is activated by a powerful pulse discharge.

While inside the degausser, media is automatically rotated and a further 2 magnetic discharges are applied, ensuring complete erasure. The entire process takes approximately 75 seconds. The processor controlled SDD Master continuously monitors the operation, ensuring that the erasure cycle is completed. The operator is immediately alerted to and interruptions in the erasure cycle on the LCD control panel.

When erasure logging is required, simply connect the SDD Master to a PC or Laptop and then open the logging program. After clicking on the “Find Machine” button, all of the unit details are automatically entered into the log including; model, serial number and firmware version. Further data regarding operator, customer and media is then entered via keyboard or barcode scanner.

The hard drive or tape is placed into the tray as before, however, the operator can now click the “Destroy” button on the screen which starts the degaussing process remotely. The lower portion of the screen now shows all the details of the erasure including; Date, time, media serial number, capacitor voltage, magnetic gauss field and confirmation that the media was degaussed successfully.

With an optional label printer selected, after the degauss cycle is complete, a label is printed which the operator can stick to the hard drive or tape confirming it has been erased. The label contains the serial number, date & time and confirmation of destruction as standard. Other fields can also be selected and added in the log software’s “Supervisor Mode”.

If this data is highlighted, all of the details on the screen, along with the data entered, can be printed out as a report when selecting thePrint Button. As new media is erased, the details will be added to the Media Processed Log in the lower half of the screen. By highlighting erase records, the logs of one or more can be printed as required.

There is a “Supervisor Section” in the software, which is password protected. This allows the supervisor to decide which fields are required and which fields must be completed by the operator. The log record can be stored anywhere on the PC or Network to ensure it is backed up. It can also be archived at any time by exporting as a .CSV file.

NOTE: After degaussing, hard drives should not be reused, as they are stressed in the erasure process. Some backup tapes may not be reusable after degaussing due to the servo track being erased. 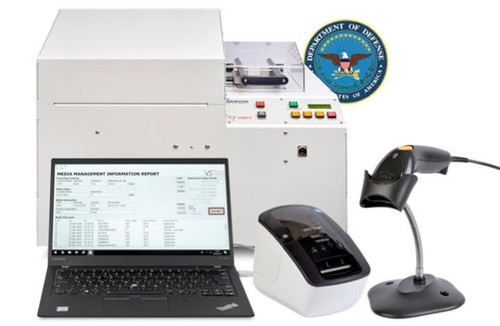