When reusing DLT tapes, it is important that all data and formatting is removed completely. The V91 DLT/LTO tape degausser has a powerful degaussing magnet that removes all patterns, thus eliminating all data and formatting, leaving them completely clear and ready to reuse. Degaussing DLT, LTO and other magnetic media will ensure that subsequent recordings will be at their very best. Degaussing can extend the life of magnetic media such as DLT, which in turn delivers cost savings.

Anyone replacing their existing DLT drive with the new DLT1 drive should be aware that their existing DLT tapes will be unsuitable for use with the new drive. The formatting needs to be removed and using the "erase" function on the tape drive is simply not sufficient. The only way to remove the formatting is by degaussing the DLT media. Degaussing removes all magnetic patterns from the tape, thus eliminating all data and formatting. The V91 DLT/LTO will erase DLT tapes in 12 seconds, leaving them completely clear and ready to use in DLT1 drives. Degaussing also ensures the user that their next recording will be at its very best.

LTO Degaussers alter the magnetic charge on LTO tape cartridges. This process will erase the data stored on the tape and also erases the cartridges servo tracks, making the cartridge completely unreadablethus protecting your data from even the most determined investigation. In addition to degaussing DLT media so that it can be used in the new DLT1 drives, degaussing DLT media has a number of other benefits. Degaussing DLT and other magnetic media can extend its life, which in turn delivers cost savings.

Many operators claim benefits of up to four times the useful life of some types of media. The reduction in down time of computers & data processing apparatus arising from faulty or imperfect media is an expense which can be eliminated by degaussing media. And finally, quality in the performance of degaussed media has also reported to be of high value to users and improves efficiencies.

The V91 DLT/LTO is designed to help you comply with the following Government Mandates that require destruction of sensitive information stored on Hard Drives and Tapes before there disposal. 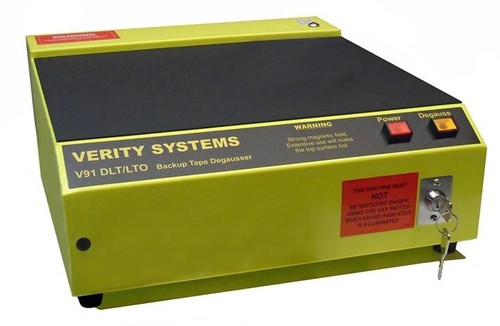