When to clean LTO Tapes:
New tapes before first use; Tapes that are returned from an offsite storage facility; after a permanent read error occurs; after changing the capacity of a cartridge.

Even very small particles can cause problems.
The picture on the right shows a small area of a recorded LTO tape. The slanted lines in the center contain servo data that are used by the drive to find the location of the data tracks. The data tracks are located on both sides of this servo band.

The diameter of the brown particle is less than 100 μm (less than the thickness of a sheet of copy paper). But due to the high density of the recorded data, a particle of this size renders hundreds of bits unreadable.

The error correction circuitry of the drive would not be able to recover the data even with this tiny degree of contamination.

Removing the contamination without damaging the tape
High capacity tapes are delicate. It is paramount to use only proven and trusted technologies to clean the tapes. Our technology was developed in cooperation with a major tape library company and was thoroughly tested by all media companies.

When to clean tapes
Which tapes should be cleaned and when should they be cleaned?

The cleaning method: Tape cleaning has a long history. Of the methods tried historically, perpendicular cleaning has proven the most effective. This method removes debris from tape with the use of a cleaning blade that is mounted perpendicular to the tape. As the tape moves past the blade, debris is removed from the tape and collected by the blade.

The drawing illustrates this basic principle. A carbide blade contacts the tape to remove debris. The wrap angle of the tape is very shallow and the blade barely touches the tape. This prevents the blade from damaging the tape.

Cleaning the blade - Debris that is collected on the blade is removed by a brush after every cleaning cycle.

The biggest problem with conventional blade cleaning methods is uneven wear. Sharp, Irregular edges of grooves cut into the blade by the tape can cause tape edge damage. Our proprietary technology moves the blade perpendicular to the tape after each cleaning cycle. The blade wear is controlled to avoid all sharp edges. The blade Stays sharp and does not damage tape even after hundreds of thousands of cleaning cycles.

When to clean LTO Tapes New tapes before first use; Tapes that are returned from an offsite storage facility; after a permanent read error occurs; after changing the capacity of a cartridge. 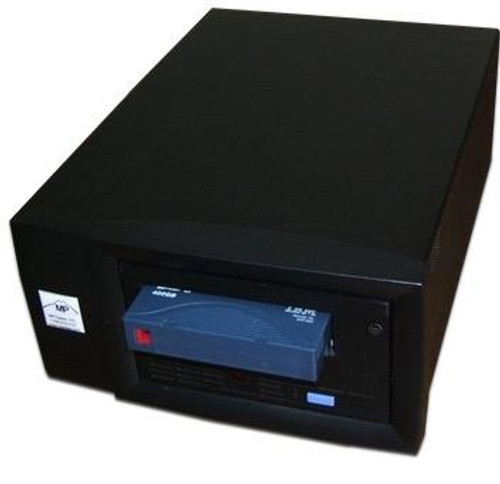